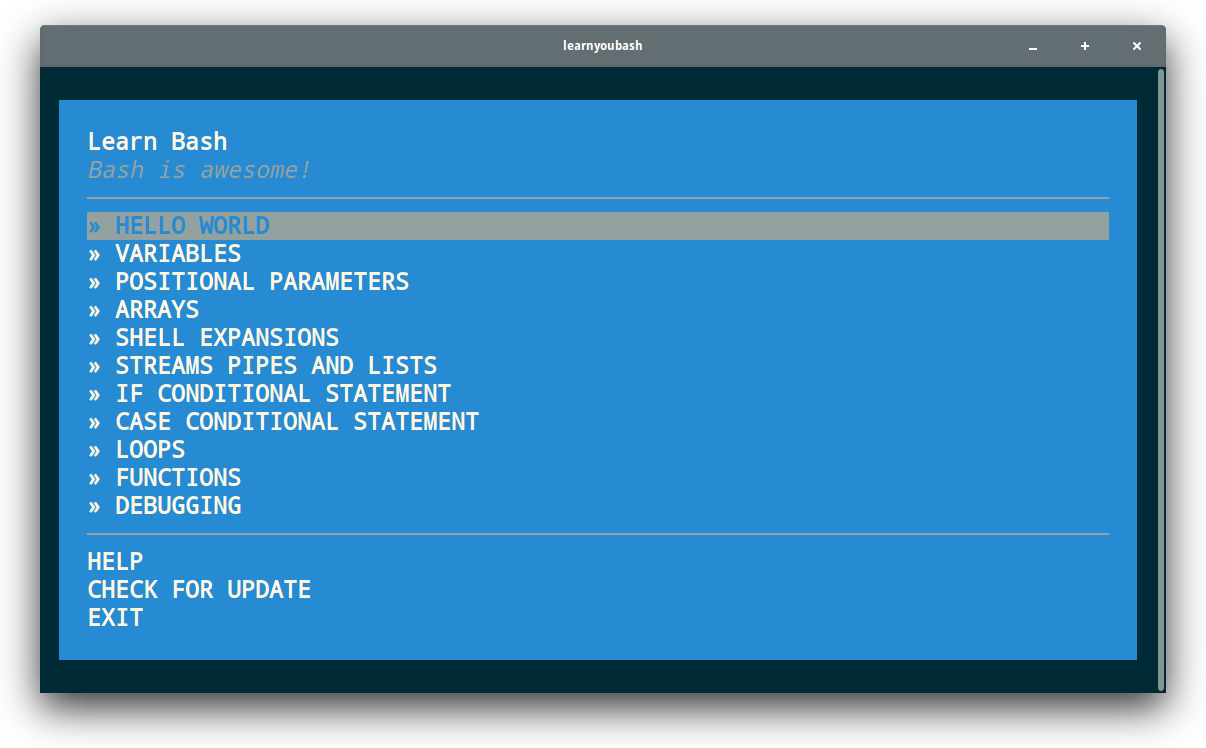 Knowing some basic scripting is always good for anyone working with servers or programming in general. Recently a new project came out that can teach you the basics of Bash in about 20 minutes.

Installation on Linux is fairly simple, as long as you have a working bash environment.

You can then run the following:

Now you can go simply open your terminal and run:

You should now be greeted with the selection screen for lessons!

The first thing I noticed and liked about learnyoubash was the very simple display of the lessons it was going to take you through.

It clearly shows a starting point of printing “Hello World” and quickly gets to parameters, conditional statements, and functions. Additionally, it has options for help, updating, and exiting the script; all simply controlled by using the arrow and enter keys.

The Way It Teaches

Something that I found nice about learnyoubash was the way it displayed information. It gives you the steps in a chronological order to complete “the challenge” that is given.

The lessons are quite thorough as to giving a detailed explanation of what each step does, how to do it, and how to correctly use it. However it’s just not spoon feeding you information where you just copy code and go. The setup behind it is where it gives you the information you need to complete the task and you have to put together what you read to actually make it work.

Like a majority of learning tools, the code behind the script is open sourced on github. This allows you to contribute to the project, report issues (I’ve actually reported two myself), and learn how something like this made if you’re interested.

For now I haven’t actually found anything I dislike about the script besides some issues relating directly to Windows.

Running It on Windows

I happen to run Windows 10 as my primary OS, I didn’t think this would be an issue if I just used the correct versions of the software listed under the projects requirements. However I found a couple issues.

For one, the entire positional parameters lesson doesn’t work, according to the author this is actually an issue with Node.js on windows. You can view the issue here.

Second I found that the “Check for update” feature doesn’t work on windows at the moment, however you can easily update the script by running the following:

This will update to the latest version of learnyoubash.

Now I’m not exactly a system admin myself so instead of seeing how I could fix the problem and run it on windows, I took the easy way out.

My suggestion is to simply create a Virtual Machine running Linux and run the script from there, this is also useful because the author tests the script on Linux so for every update you know it’ll work perfectly.